Aron and John Bontrager have teamed up to offer three yearlings in the upcoming Hoosier Classic Yearling Sale. Both farms are located in Millersburg, Ind. and will kick off with Huggable Punk the first day as Hip No. 80. 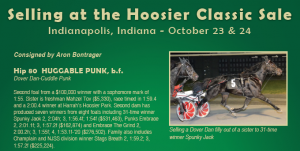 Located in AIsle 7 at the Indiana State Fairgrounds, Aron and John Bontrager have teamed up to offer three yearlings during the Hoosier Classic Yearling Sale.

Consigned by Aron Bontrager, Huggable Punk is from the first crop of Dover Dan out of the Super Punk mare Cuddle Punk, who took a mark of 1:55 as a three-year-old. She follows a half-sister, Mahzel Tov, who is by Whom Shall I Fear, that raced this year as a two-year-old and was timed in 2:00.4.

Huggable Punk has a lot of black type under the second dam and will be available for inspection in Aisle 7 before the sale.

John Bontrager will sell two trotters on the second day of the Hoosier Classic Yearling Sale. The first is Hip No. 251 Cocoa Butter, a filly by Muscle Massive. She is the first foal from the Donato Hanover mare Chailax Hanover with a mark of 1:59.2. The second dam is Merrie Annabelle elimination winner Chez Lucie, who took a mark of 1:57.2 during her career and has produced seven winners from eight foals. Cocoa Butter will also be available before the sale for examination from Aisle 7. She is nominated to many stakes outside of Indiana, including the Breeders Crown and Yonkers Trot.

Rounding out the Bontrager barn will be a Jailhouse Jesse colt Jessalittlemor, listed as Hip No. 267. The colt is a brother to six winners, including Breeders Crown elimination winner NF Happenstance, who took a mark of 1:52.2 and has in excess of $660,000 in earnings. The colt’s full brother, Exconvict, raced on the Indiana Sired Fair circuit this summer as a multiple winner. Jessalittlemor will be available for inspection in Aisle 7 before the sale.