Bluebird Yoshi and Peter Wrenn turned in an impressive performance to win a division of the $11,000 Expresson Series at Harrah’s Hoosier Park Wednesday, April 28. The duo covered the one-mile event in 1:56.3. 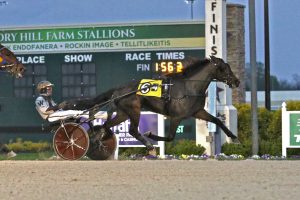 Bluebird Yoshi and Peter Wrenn scored a gate to wire win in a division of the Expresson Series Wed. April 28. It was the gelding’s first career win. Photo by Dean Gillette

Starting from post six, Wrenn had Bluebird Yoshi focused on the lead as soon as the gate folded and secured the top spot by open lengths through the first quarter in :29.2. From there, he was able to rate an even mile through fractions of :58.3 and 1:28.4 before turning it up a notch in the stretch.

Bluebird Yoshi kicked into high gear for the stretch drive and had a brief challenge from J-S Jasper and Brandon Bates, who had been tracking their progress the entire way. In the final strides, Bluebird Yoshi was able to get a comfortable advantage for the win by one length over J-S Jasper. Jesse’s Swan and Doug Rideout finished third.

Bluebird Yoshi was a bit of a surprise, paying $12.40 for the win. The three-year-old gelded son of Jailhouse Jesse is trained by Darryl Lyons and is owned by Delvin Miller, Douglas Lyons and Aaron Miller. Daryl Miller bred the trotter.

Bluebird Yoshi was making his third start of 2021 and earned his first career win in the race. With only one start last season, the lightly raced gelding now possesses a new career best of 1:56.3 for his connections. He was purchased by his current ownership directly from the breeder a year ago during the pandemic shutdown.