Bluebird Revival, driven by Michael Oosting, showed just how tough he was Saturday, July 23. The freshman trotting gelding fought hard to get the win over Help Page in Mini Series action at Harrah’s Hoosier Park. 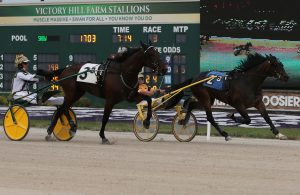 Bluebird Revival started from post two and got away in second as favored Help Page and John DeLong rallied out to set fractions of :29.1, :58.3 and 1:28.2 before reaching the stretch. Bluebird Revival waited for his turn to kick into gear and moved up the inside to nab Help Page right at the wire in 1:57.0. Spell Goodlookin and Dan Shetler finished third.

Bluebird Revival paid $18.80 as a surprise winner in the event. He is trained by Darryl Lyons and owned by Lyndon Bontrager, Douglas Lyons and Delvin Miller. Daryl Miller of Blue Bird Farms bred the son of Swan for All, who is a full brother to several standouts including Bluebird Reverend (1:53.0, $600,000), and Bluebird Deacon (1:53.1, $202,315). Bluebird Revival was purchased from the Hoosier Classic Yearling Sale for $13,000 last fall. The mile was the first win for Bluebird Revival in his third career start.

Jailhouse Dance and Oosting won the other division of the mini series. After starting from the second tier and getting away in mid pack, Oosting pulled Jailhouse Dance to the outside at the half in :58.3 and was able to flush out Facebook Official and Jared Finn around the final turn.

In the stretch, Jailhouse Dance rallied home in :28 seconds to score the win by three-quarters of a length in 1:57.0 over Brookview Darius and Trace Tetrick. Facebook Official finished third.

Jailhouse Dance is trained by Ken Rucker for owners Rock and Roll Stable and Michael Shan. Rucker also owns a portion of the Dover Dan gelding, who earned his first career win in his third career start in the effort.