Bluebird Maverick made the most of his next to last week of racing at Harrah’s Hoosier Park Saturday, Dec. 3, scoring the win in the $16,000 Open 3 Trot. Guided by Sam Widger, the Indiana sired gelding stopped the timer in 1:55.4. 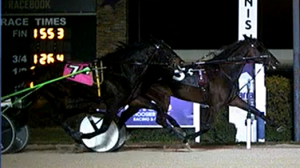 Bluebird Maverick fends off Jack Fire at the wire for the win in the Open 3 Trot Saturday, Dec. 3 at Harrah’s Hoosier Park.

Bluebird Maverick was on a mission from the start and trotted out well. However, he didn’t cross over easily as several other horses also left for the lead, including Annas Lucky Star and Kyle Wilfong, who settled into second before the first turn, giving Bluebird Maverick the right away to the lead in :27.3. From there, the four-year-old was able to get a breather to the half in :57.1 and three-quarters in 1:26.4 before heading down the stretch.

Bluebird Maverick trotted well in the lane with Annas Lucky Star ready to pounce when the passing lane opened up. But it was the late closers that posed the biggest threat led by Jack Fire and Trace Tetrick. Bluebird Maverick held his ground to the wire for the win by a half-length over Jack Fire. Shadrack Hanover and John DeLong finished third with a late closing effort.

Bluebird Maverick, one of the favorites of the field, paid $8.20 for the win. The Swan for All son is owned by Robert Reeser, John Johannsen and Holly Case, all of Delaware. Reeser also trains the gelding, who was bred by Blue Bird Meadows’ Daryl Miller and Kenneth Bontrager.

Bluebird Maverick earned his fourth win of the year and ninth overall. He now has more than $215,000 lifetime and his career best time of 1:53.4 was taken earlier this year at Harrah’s Hoosier Park.

Bluebird Maverick was sold under the name Bluebird Swan at the Hoosier Classic Yearling Sale in 2019. He was purchased for $28,000 by his connections. Reeser, who is known for his expertise with trotters, has had a lot of success with horses from Blue Bird Meadows, including Bluebird Reverend, who has more than $600,000 on his card and 38 wins with a mark of 1:53.0.

Bluebird Maverick is a full brother to Bluebird Rambo, who has a mark of 1:53.3 and more than $300,000 in earnings and also raced for Reeser. The family will have a weanling from the first crop of Pilot Discretion named Bluebird Lola that will sell next year as a yearling in Indiana.