Bluebird Jesse was a strong winner at Dover Downs Tuesday, Feb 18 with a near gate to wire win in the $17,500 Winner’s Over. The six-year-old gelded son of Jailhouse Jesse stopped the timer in 1:53.2 with Tim Tetrick at the controls. The win marked a new lifetime mark for the Indiana sired gelding. 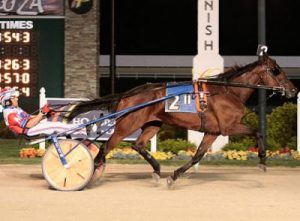 Tetrick moved Bluebird Jesse to the lead just after the quarter mile marker and never looked back, earning his second win of 2020 for owners Brian Carsey, Adam Friedland and Casey Myers. Myers and Carsey reside in Indiana. Daryl Miller’s Blue Bird Meadows was the breeder on Bluebird Jesse, who now has 19 career wins and in excess of $350,000. Jim King Jr. serves as the trainer.

Bluebird Jesse started off on the Indiana Sired Fair Circuit at two before graduating to the pari-mutuel ranks and Indiana Sires Stakes action. Keith Roth conditioned the $11,500 yearling purchase at two and three in Indiana before he ventured to the East Coast.

Two other Indiana sired horses scored wins on the Tuesday program at Dover Downs. Rockin Patsy, a four-year-old daughter of Rockin Image bred by David Yoder and Daryl Lehman, scored a win in 1:55.3 in the first race with Tony Morgan driving. Girl Named Fred, driven by Allan Davis, was a longshot winner in the third race, paying $22.20 to win. Now owned and trained by Tyler Jump, the Fred and Ginger four-year-old mare was bred by Howard Taylor, who owns part of Swandre the Giant.