Bluebird Dove and Peter Wrenn turned in a near gate to wire effort to win the $91,500 Buckette Wednesday, Sept. 21 at the Delaware County Fairgrounds. The event was the filly day of Little Brown Jug week, showcasing both three-year-old trotting fillies in the Buckette and three-year-old pacing fillies in the Jugette just a day before the Little Brown Jug. 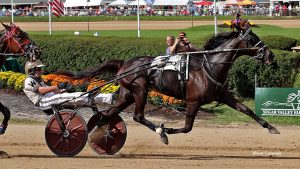 Bluebird Dove and Peter Wrenn score the win in the Buckette during Jug Week at the Delaware County Fairgrounds in Ohio. Photo by Brad Conrad

Starting from post three, Wrenn went straight for the lead with Bluebird Dove, who was 5-1 on the morning line, but got the seat behind Disclosure and Tim Tetrick through the first quarter in :27.1. Heading to the half, Bluebird Dove was out to challenge and took over the top spot through the middle fractions of :56.1 and 1:24.1. In the final turn, Valentina Blu and Joe Bongiorno, the favorites of the 10-horse lineup, was charging up on the outside, but Bluebird Dove held her ground.

Disclosure also came out of her resting spot in post two and challenged but it was all Bluebird Dove at the wire in 1:52.2, a new world record for three-year-old trotting fillies on a half-mile oval. It was a final quarter in :28.1 that brought her home as a three-quarter length winner over Disclosure with Valentina Blue another three lengths back in third.

Bluebird Dove paid $7.60 for the win. The Swan for All three-year-old filly hails from the Melanie Wrenn Stable for owners David McDuffee and L & L Devisser LLC. Daryl Miller of Blue Bird Meadows bred the filly out of Goosebump Hanover, who has also produced Bodelicious as her first foal, who has a mark of 1:54.4 and is still racing. Goosebump Hanover was a strong racehorse herself, earning more than $250,000 with a mark of 1:55.2. She has a two-year-old filly by Helpisontheway named Bluebird Armoni, a $24,000 yearling purchase last year who has raced this year. The family has a yearling colt by Six Pack named Bluebird Pyramid that is not listed to sell in the upcoming Hoosier Classic Yearling Sale. Bluebird Dove was a $60,000 yearling purchase by her current connections out of the 2021 Hoosier Classic Yearling Sale.

Bluebird Dove has had a good season in Indiana. She has an Indiana Sires Stakes preliminary leg to her credit in near track record time, plus she was the winner of the Horseman Stake at the Indiana State Fair during Grand Circuit Week. Overall, she now has six wins in 13 starts after not racing at two and is now closing in on $200,000 in career earnings.

Indiana sired horses were also represented in the 50th Jugette. Trick of the Light from the Brian Brown Stable finished third in her elimination, pacing in 1:50.4 for driver Trace Tetrick and came back to finish fourth in the $205,100 final. The three-year-old filly by Odds on Equuleus came from off the pace and closed in :27.2, pacing her mile in 1:51.4 at odds of 80-1. Treacherous Dragon and Dexter Dunn scored the win in the Jugette for the Nancy Takter Stable in 1:51.0, just a neck ahead of Sea Silk and Chris Page, trained by Ron Burke. Sweet Treasure and Andrew McCarthy, also from the Takter barn, finished third.