Two talented fields of three-year-old trotting fillies were involved in the second leg of the $47,500 Indiana Sires Stakes Tuesday, June 14 at Harrah’s Hoosier Park. Both divisions were competitive, setting the season up for some great racing in 2022 in the sophomore filly trotting division. 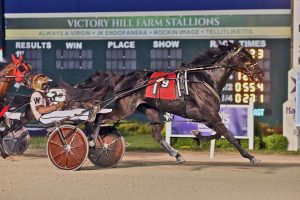 Bluebird Dove and Peter Wrenn rallied to a near track record for their division. The Swan for All filly got away third as Jusmakinyalook and Jordan Ross set the first fraction of :27.1 with Call Me Dani and Sam Widger taking over before the half in :55.4. At the head of the lane, Bluebird Dove tipped out and began trotting home, rolling by her opponents with a :26.4 final quarter to win by one and three-quarter lengths. Jusmakinyalook finished second over Call Me Dani in a close photo. Bluebird Dove won in 1:52.3, just a fifth of a second off the track record set by Next Level Stuff in Breeders Crown action in 2020 at Harrah’s Hoosier Park in 1:52.2.

Bluebird Dove was the favorite of the field, paying $2.60 for the win. Trained by Melanie Wrenn, the filly is owned by David McDuffee and L & L Devisser LLC. Daryl Miller of Blue Bird Farms bred the sophomore. After going unraced at two, she is now three for six this season with two second place finishes. The mile was a new lifetime mark for Bluebird Dove, who was among the top 10 sellers by Swan for All as a yearling, bringing $60,000 through the Hoosier Classic Sales ring.

Bluebird Dove is out of the fairly young mare Goosebump Hanover, who had a mark of 1:55.2 and earned more than a quarter million in her career. Her first foal is Bodelicious, also by Swan for All, who has a mark of 1:54.4 and earnings of nearly $80,000 and is still racing. Bluebird Dove is the second foal, and the family has a two-year-old this season by Helpisontheway named Bluebird Armoni. There is also a yearling by Six Pack named Bluebird Pyramid waiting in the wings.

The other division was equally impressive as M-M’s Dream and Sam Widger made it two for two in Sires Stakes action. The Swan for All filly waited patiently as Luv Lorelei and Robert Taylor set the early tempo of :27.4 before M-M’s Dream took over at the half in :57.1. From there, the filly was strong, trotting home in :26.4 to score the win in 1:53.4. Luv Lorelei also trotted home in :26.4 to finished a length back in second. Swan Trixie and Peter Wrenn finished third.

M-M’s Dream, last year’s freshman trotting filly champ in Indiana, paid $3.00 for the win. She was the favorite, paying $3.00. Henry Graber Jr. trains for owners Eleven Star Stables, Frank Baldachino and Hillside Stables. Mervin Miller bred the standout filly, who is now eight for 10 lifetime with more than $315,000 in earnings. The mile was a new lifetime mark for M-M’s Dream.