Bluebird Dove picked a good time to break her maiden. Making only her second career start, the Indiana sired filly trotted home to a win in the $18,000 final of the Mya Tri Series. The series is named after standout Indiana filly Mya Tri, who went undefeated as a two-year-old en route to year end honors in the early 2000s. 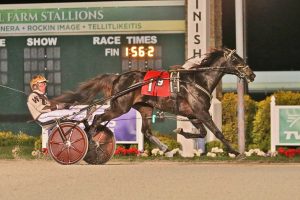 Driven by Peter Wrenn, Bluebird Dove was seeking a little redemption in the final. She made her debut in Indiana in the preliminary round and finished second before going off stride and placed to fifth due to a lapped on break. Prior to her trip north to Harrah’s Hoosier Park, the unraced two-year-old last year turned in two qualifiers at Pompano Park, winning the last one in 1:58.1. The Melanie Wrenn filly was ready for action in the series.

Starting from post one, Bluebird Dove got away in the two hole as Sassy Babe and Charlie Conrad set the first fraction at :29.0. Wrenn then had Bluebird Dove out and around the leader by the half in :58.3. The filly then opened up on the field heading to the three-quarters in 1:26.4 before trotting home in :29.3 for the win by nearly two lengths in 1:56.2. Race favorite GV Swanderfuh and James Yoder moved up to finish second over Sassy Babe for third.

Bluebird Dove paid $5.80 for the win. The Swan for All sophomore is owned by David McDuffee and L & L Devisser LLC. Daryl Miller of Bluebird Farms bred the daughter of Goosebump Hanover, who took a mark of 1:55.2 and earned more than a quarter million during her racing career. She is now a 100 percent producing brood mare with two foals of racing age both winners. Bluebird Dove joins Bodelicious, also by Swan for All, as a winner. Goosebump Hanover is also the dam of Perfect Spirit, a son of Andover Hall who has a mark of 1:51.2 and more than $650,000 in earnings before being exported.

The family has a two-year-old filly to hit the track this year named Bluebird Armoni by Helpisontheway and a yearling colt named Bluebird Pyramid, wo will be in the sales this fall. Bluebird Dove was a $60,000 yearling purchase from the Hoosier Classic Yearling Sale. She was a top 10 seller from the multiple Indiana Trotting Sire of the Year Swan for All.

Later in the card, Starlit Dandy and Robert Taylor were winners in the $18,000 Cardinal Series Final. The Dover Dan sophomore sat patiently in the two hole before popping out in the stretch and rolling home to a win in 1:56.2. Late Nite Hawk and Kyle Wilfong closed well for second over Spent and Trace Tetrick for third.

Trained by Mike Hollenback, Starlit Dandy paid $6.00 for the win. He is owned by Peter Schmucker Jr. and Hollenback and was bred by John Wagler. Starlit Dandy is now two for three this season and the mile was a new lifetime mark.

The evening was polished off by the $20,000 Chad Carlton Trotting Series Final. Massive Profit and Michael Oosting were winners by open lengths in 1:56.4. Justathriller and Doug Rideout finished second and Katie Doodle Dandy and LeWayne Miller finished third.

Massive Profit, a three-year-old son of Muscle Massive, is owned by Thestable Massive Profit of Ontario. Ross Leonard is handling the training duties of the gelding, who is three for five on the year with two of those wins at Harrah’s Hoosier Park.