After turning in limited starts last year at two, Bluebird Boston proved a year made a big difference to his racing abilities. The Rockin Image sophomore scored a win in 1:56.2 to break his maiden during action Wednesday, April 27 at Harrah’s Hoosier Park. 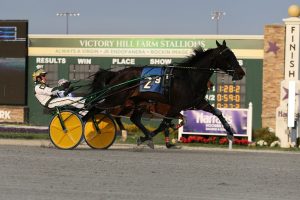 Starting from post two, Bluebird Boston and John DeLong got away third in the field of 10 as Pericles and Brandon Bates moved out quickly for the lead. They were on top by three at the quarter in :27.2 before getting a bit of a breather to the half in :59.0. A second tier of defenders were on their way toward the leaders around the final turn led by GD Petaltothemedal and Andy Shetler followed closely by Vel Wemiss U Dean, who competed on the Indiana Sired Fair Circuit last season.

In the stretch, Bluebird Boston found the room he needed on the outside and paced home in :27.2 for the win by three-quarters of a length over Vel Wemiss U Dean and Clay Craib. Pericles finished third.

Bluebird Boston was making his first start of 2022 for trainer Tabitha DeLong. He paid $10.80 for the win. The Bluebird Farms product is owned by Jesse DeLong, John DeLong, Bruce Alexander and Dean Alexander. He is the first foal from the Shadow Play mare Alibi Seelster, who has a mark of 1:51.2 and more than $300,000 in earnings. He has a two-year-old half sister named Bluebird Alibi who will be on the track this season and a yearling half sister named Bluebird Alexis by JK Endofanera. Bluebird Boston was purchased for $24,000 from the Hoosier Classic Yearling Sale.

Harrah’s Hoosier Park also hosted the first round of the Beth Dutton trot, named after the popular character on the hit television show “Yellowstone.” Kildare King and Peter Wrenn rallied late in the race to score the win by a neck in 1:54.3, a final panel in :26.4. Birdman and Trace Tetrick finished second over Yo Mister and Verlin Yoder for third.

Kildare King paid $4.40 for the win. The Trixton four-year-old gelding is owned by Tom Crouch and trained by Chris Beaver. He is now three for four in 2022 with his career best time taken last year at three at The Red Mile in 1:53.2.