The 64th annual Summer Mixed Sale offered more than 600 horses in the catalog over a two-day period Tuesday, Aug. 27 and Wednesday, Aug. 28. The sale, held at the Champions Center Expo in Springfield, Ohio, featured many yearlings and racehorses from the state of Indiana. 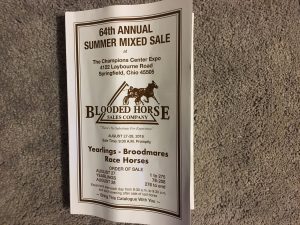 In the trotting ranks, a yearling filly by Whom Shall I Fear named Fear the Heat as purchased for $20,000 by Ira Steinberg of Arlington Heights, Ill.