After winning his first three starts of 2022 at The Meadowlands, Birdman scored his first career win at Harrah’s Hoosier Park Wednesday, May 11, winning the $25,000 Beth Dutton Final. The trotter got the call in a three-horse photo for his 5th win of 2022. 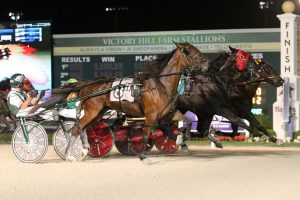 Birdman, in the center with the red hood, got a nose in front at the wire to score the win in the Beth Hutton Final. Trace Tetrick is in the bike. Photo by Dean Gillette

Starting from post four, Birdman and Trace Tetrick left the gate in the center of the track looking for the lead. Race favorite Kildare King and Peter Wrenn also left quickly from the outside seeking the top spot, but Birdman was able to secure the first quarter in :27.2 before Kildare King went onto the lead. The move also spurred High Queen Anne and Jared Finn to move onto the lead just after the half in :55.0. From there, the top three followed along in single file around the final turn as the petite Imalovelylady and Michael Oosting came first over toward the leaders.

In the stretch, Kildare King took over and Birdman seemed to be buried along the rail, but midway through the lane, Tetrick moved the Swan for All gelding to the outside through traffic and was clear to advance. He closed in on Kildare King just like Yo Mister and Verlin Yoder were closing in on him on the far outside. The trio of trotters hit the wire together with Birdman between horses, getting a nose up to the wire for the win in 1:52.3. Yo Mister trotted home in :26.4 to finish second over Kildare King along the inside.

Birdman paid $6.80 for the win. The four-year-old is owned by Pollack Racing LLC and Jeff Cullipher. Cullipher trains the Indiana sired gelding, who was bred by Karl Slabach.

The mile was also a new lifetime mark for Birdman, who only had two starts as a two-year-old before coming back last year at three to turn in two starts. This season, he has been first or second nine of 15 starts and now has more than $63,000 in earnings. Birdman started off at the fairs in Michigan and then raced at Northfield before joining the Cullipher Stable in early 2022.

Birdman was a $7,500 purchase from the Michiana Classic Yearling Sale. He’s the second foal out of the Yankee Glide mare Drunken Angel.

The other division was won by Luv Lorelei and Robert Taylor in a time of 1:54.2. She was a nose winner over Bluebird Dove and Peter Wrenn with Double A Samantha and John DeLong finishing third. The top 10 will meet for the Msnaughtybynature final next Wednesday.