Birdman, the Indiana sired trotter owned by Pollack Racing and Jeff Cullipher, extended his winning streak to four Friday, Jan. 21 at The Meadowlands. The big black gelding equaled his career best time of 1:57.1 in the race. 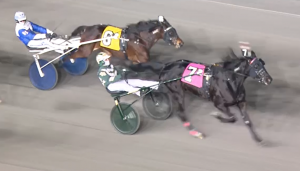 Starting from post seven, Birdman was joined by Mnemonic and Scott Zeron out of the gate in pursuit of the lead. Mnemonic had the slight advantage from post six and reached the quarter first in :29.1 with Birdman hung on the outside. Then, Birdman put his big stride to work and cleared to the front for driver Yannick Gingras, settling in at the half in :58.1 and three-quarters in 1:27.2.

Birdman was untouchable down the stretch, trotting an evenly rated mile for the win by three-quarters of a length over Mnemonic. Lady Resort As and Steve Smith closed in quickly on the outside to finish third.

The favorite of the field, Birdman paid $3.00 for the win in the $13,0000 conditioned trot. He is trained by Cullipher with Karl Slabach serving as breeder on the Swan for All four-year-old.

Birdman has had a slow start to his racing career. With only six career starts in three years, he started twice as a two-year-old and twice last year at the end of this three-year-old season, winning his last start of the year at Northfield Park before heading to The Meadowlands where he has reeled off three straight wins. He was a $7,500 yearling purchase at the Michiana Classic Yearling Sale. Birdman is only one of two foals from the Yankee Glide mare Drunken Angel. The other is Skyway My Way, a gelding by Jailhouse Jesse that earned a mark of 2:02.3 and made $17,000 during his career.

Cullipher is once again in contention for leading trainer at The Meadowlands. He won his first Meadowlands title last summer. Birdman has given him three of his six wins so far with Sonny Weaver N winning two of two.