Little Rocket Man shot to the front and never looked back, crossing the wire for the win in a division of the Jerry Landess series at Harrah’s Hoosier Park Friday, April 19. The three-year-old Rockin Image colt, driven by Trace Tetrick, is now three for three in his brief career. 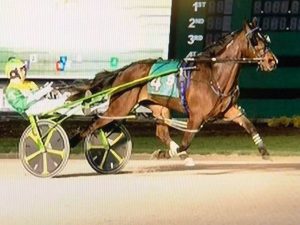 etrick moved Little Rocket Man to the outside around the final turn and broke loose from the pack I the stretch, pacing home in :25.2 to secure the win in 1:52.4, a new lifetime mark. Heavily favored Feherty and Peter Wrenn finished second while Sunny Shark and Sam Widger finished third.

Unraced at two, Little Rocket Man sold in the 2017 Hoosier Classic Yearling Sale for $18,000 under the name Just Like Pete. Russ Beeman and Jack Freeman changed the colt’s name to Little Rocket Man and were patient as the colt was unraced at two. Coming onto the scene in 2019, he has been strong in all of his starts, winning all three of his starts so far for trainer Missy Essig.

Little Rocket Man gets his skill honestly. His dam, GT Miss Royal, was a talented race mare during her career, winning 31 of her 280 starts and purses in excess of $230,000. The career best time for the Indiana bred mare was 1:52.3. She raced ever year until she was 11 years old before retiring to the broodmare ranks.