It’s been a big week for the James and Cheyenne Yoder Stable and it’s only Wednesday. The team sent out two winners in Indiana Sires Stakes action, starting with two-year-old filly trotter Ima Diamond Babe on Tuesday followed by a dominant win by May Baby in the three-year-old filly trotting ranks.

Ima Diamond Babe was a bit of a surprise, going off at odds of 53.40 in the fourth leg of the $38,000 Indiana Sires Stakes first division.  Four Under Par and Doug Rideout cut the mile. Yoder got Ima Diamond Babe into gear after riding in the three-hole most of the way and trotted home in :28.3 for the three-quarter length win in 1:57.2, a new career best mark. Fantasia Flurry and Ricky Macomber Jr., also a longshot, finished third followed by Real Diamonds K and Michael Oosting for third.

Ima Diamond Babe, owned by James and Cheyenne Yoder, hit the board for the first time in six starts. The Guccio filly, bred by Merle Yoder of Topeka, Ind., was a $27,000 yearling purchase from the Hoosier Classic Yearling Sale last fall. She now has $25,000 on her card. 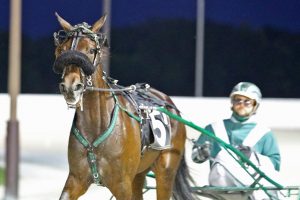 While Ima Diamond Babe was a surprise, a win with May Baby was no shocker. Also, by Guccio, May Baby got away in mid pack as Pretzel Party and Sam Widger passed the first quarter in :28.1. Yoder pulled on the right line and May Baby shot to the lead, passing the half in :57.2. At that point, May Baby was hitting her best stride, opening up on the field at the three-quarters in 1:25.0 before trotting home in :28.0 to win in 1:53.0 with Yoder never moving his hands from the handholds. Skyway Tinacious and Peter Wrenn finished 11 and one-quarter lengths back in second followed by Woodside Datendiva and Trace Tetrick for third.

Owned by Cheyenne, May Baby hit another milestone with the win, going over the $300,000 mark. She now has four wins in seven starts, taking a new personal best time of 1:52.3 earlier this year at Harrah’s Hoosier Park.

In the other division of sophomore trotting fillies, Rock Swan looked impressive for her connections, winning in 1:54.4. The daughter of Swan for All had a similar trip, moving to the lead at the halfway mark for Trace Tetrick to lead the way to the wire. Queen Margherita and Yoder made one final surge toward the leader at the wire, but Rock Swan was tough, winning by a head. Swan Beauty and LeWayne Miller finished third.

Owned by S & R Racing Stables and Anthony Lombardi, Rock Swan is now five for seven in 2020. Last year’s champion freshman filly is closing in on $500,000 in career earnings. Erv Miller trains the talented filly, who took a mark of 1:53.1 earlier this year at Harrah’s Hoosier Park.

Later on, the Wednesday card, two divisions of two-year-old trotting colts and geldings was held with Breckenridge getting the best result of a four-way photo. Brookview Bolt and Sam Widger finished second over Illini Earl and Trace Tetrick for third.

Trained and driven by Dan Shetler, Breckenridge, owned by Shetler and Dojea Stables, now has three wins in six starts. The Class Included gelding has earned in excess of $67,000. His win Wednesday in 1:56.4 was a new career best time.

The other division of freshman trotting colts and geldings was won by King Felix and Doug Rideout. The Pine Credit gelding led the way through the first quarter in :28.2 before getting a challenge from Monarch and Verlin Yoder on the outside at the halfway point in :58.2. King Felix came back strong in the stretch moving late to overtake Flying Swan and Jay Cross by one and one-quarter lengths in 1:58.0. Predator and Prey and Jared Finn finished third.