A field of six included five Dover Dan sophomores and the top three spots were taken down by them led by Late Nite Hawk and Kyle Wilfong. The race was for Indiana Sires Stakes eligible three-year-olds with a purse of $17,500 under the call of Rick Moore, Vice President and General Manager of Racing, who was filling in for Track Announcer Michael Chamberlain. 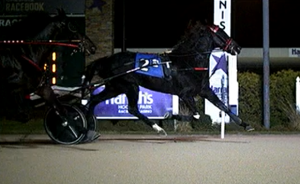 Epic Dreamer and Rick Plano were the first to commit to the lead from the starting gate, leading the way to the quarter in :28.1. The field was in single file moving to the half in :57.1 before Late Nite Hawk was flushed to the outside from his three-hole resting spot. Land of Freedom and Trace Tetrick sat at his back until the top of the lane when they went off stride.

In the stretch, Late Nite Hawk took over with Scorecard Dan and John DeLong sticking close to the leaders. Late in the race, Dans Credit and Jordan Ross made a big closing move to close the gap, but Late Nite Hawk was strong through the finish, winning in 1:55.0, a final quarter in :27.4. Scorecard Dan finished three-quarters of a length back in second and just a neck ahead of Dans Credit for third.

It was the fifth win of the year for Late Nite Hawk, who took a mark of 1:53.2 earlier this year at Harrah’s Hoosier Park. He had limited starts at two last year with no wins, and his earnings tally is now just shy of $100,000. The gelding is a half brother to the quick Predator and Prey, who has a mark of 1:53.3 and more than $264,000 and both are half-brothers to the Indiana champion Satin Dancer, winner of more than $739,000 and a mark of 1:53.0. The dam, Shaken Not Stirred, has six foals of racing age and all six have marks of 1:56.0 or faster. She has four six-figure earners with Late Nite Hawk coming close to joining his older siblings in that category. The family has a two-year-old Dover Dan gelding this year named Topville Swift Dan, who already has a mark of 1:55.2 and earnings of $32,000.

Late Night Hawk was one of 61 foals sold at auction from the first crop of Dover Dan. He sold under the name of Topville Satnebony at the Hoosier Classic Yearling Sale for $10,000.