It was a big night for Indiana sired horses at Rosecroft Raceway in Maryland Wednesday, Dec. 4 as four winners on the card represented the Hoosier State. Hypnotic Key, Casino Cash, Skyway Stella and Coffee’s Ready were all winners during the evening card. 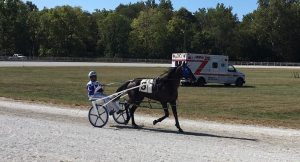 Skyway Stella, shown with Odell Cross, prepares for the ISFC Championships at the Shelby County Fairgrounds in early October. Photo by Tammy Knox

Kicking off the night was one of two winners from the Indiana stallion Hypnotic Blue Chip as Hypnotic Key was a winner for driver Tyler Davis and trainer Sheldon Powell. The three-year-old filly, bred by Alvin Schwartz, sat along the rail until the stretch, rolling to the lead for the win by one-half length in 1:57.3 in the $7,500 conditioned pace.

Later in the card, Skyway Stella, also by Hypnotic Blue Chip, used a first over move to top her opponents in a similar conditioned pace, winning by two lengths in 1:55.2 for driver Frank Milby and trainer John Cabot. The sophomore filly competed on the Indiana Sired Fair Circuit in 2019 and finished second in the $10,000 ISFC Championships at the Shelby County Fairgrounds in early October with Odell Cross in the bike. Skyway Stella was bred by Slabach Brothers Standardbreds.

Other Indiana winners on the card included Casino Cash, a four-year-old son of Swan for All bred by Lynn, Brett, Candice and Barbara Wilfong. Casino Cash won the gate to wire performance in 1:57.2 for the Milby-Cabot duo.

Coffee’s Ready, a four-year-old daughter of Net Ten EOM, was the final Indiana winner of the night for trainer-owner-driver David Hill III. Coffee’s Ready, who was campaigned by Charlie Conrad last year, sat patiently before finding room in the stretch to win by two lengths in 1:56.4 against conditioned pacers.