Vel Letsroll South and Kevin Lambright turned in the quickest mile during the Indiana Standardbred Association Elite series Monday, Aug. 30 at the Indiana State Fairgrounds. The duo covered the one-mile distance in a time of 1:52.3, a new lifetime mark. 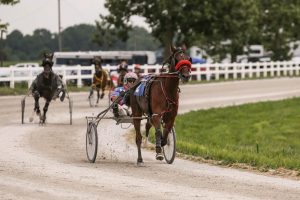 Vel Letsroll South, shown earlier this year at Converse, turned in the fastest mile of the day during the ISA Elite Series at the Indiana State Fairgrounds Monday, Aug. 30. Photo by Dean Gillette

Vel Letsroll South had a game plan at the start and executed it, going to the lead and setting fractions of :27.2, :56.3 and 1:25.0. The three-year-old Time to Roll gelding picked up the tempo in the stretch, rallying home in :27.3 to fend off late challengers for the win by one length. Northern Network and Jordan Ross closed in for second followed closely by Lil Joe III and Jay Cross for third.

Vel Letsroll South is owned by King Racing Stable and trained by Larry King. Bred by Charlie K Racing Inc. of New York, the sophomore gelding has five wins this year. He has matched his yearly total in earnings already from his two-year-old season and has in excess of $25,000 in career earnings.

Vel Letsroll South has now won his last two races, also scoring a win at Shelbyville the prior week. His other three wins were recorded early in the first round of Indiana Sired Fair Circuit (ISFC) action.

The win with Vel Letsroll South was one of two on the card for Lambright and King. They also connected with Vel Mr Nice Guy in the second division of three-year-old colt and gelding pacers. Vel Mr Nice Guy started his journey from post one but experienced broken equipment while leading the field to the quarter in :28.2. He continued to move forward through fractions of :58.3 and 1:28.2 before drawing away from the field for the win in 1:55.0, winning by three lengths, a final panel in :26.3. Victor Hic and Logan Loney finished second over Jet Ace and Don Eash for third.

Vel Mr Nice Guy is owned by King Racing Stable and was bred by Alvin Schwartz. The Straight Shooting gelding earned his sixth win of 2021. His career best time of 1:54.0 was taken as a two-year-old at the Indiana State Fairgrounds. He now has 10 wins in 30 starts and earnings in excess of $45,000.