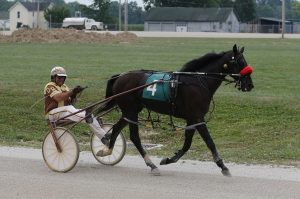 DP Realordeal and Doug Rideout will vie for the title in the Governor’s Cup Championships for two-year-old colt and gelding pacers at The Indiana State Fair Thursday, Aug. 12. Photo by Dean Gillette

Several standouts have emerged on the Indiana Sired Fair Circuit (ISFC) this season, and several races will feature those matchups, including the two-year-old colt and gelding pacers. Set as the second race on the card, DP Realordeal and Doug Rideout will be one of the front runners, facing Caches Miracle and Logan Loney and Luckychris from the Curtis Rice barn. All three horses have multiple wins this season with DP Realordeal coming into the final on a two-race win streak.

Trained by Bill Webb, DP Realordeal enters the Governor’s Cup Championships with five wins in nine starts and only one of those back of third place. Doug Rideout has been in the bike for all of his starts with his career best time taken in July at Shelbyville in 1:58.0. The Real Desire gelding is peaking at the right time with four wins in the last five starts. He has drawn post three in the Governor’s Cup Championships.

Joining DP Realordeal as a major contender in the freshman pacing colts and geldings division are a pair of contenders from the Donna Loney barn. Both Be A Lucky Star and Caches Miracle have won their past two starts. Be a Lucky Star, starting from post one, has been racing at Northfield Park. Caches Miracle starts from post four with a win at Portland to set him up for the final.

The two-year-old colt and gelding pacing championship will also feature the return of Luckychris, who was dominant the first month of the ISFC. The Luck Be Withyou colt, owned by D & R Racing Stable of Benton, Ky. has won six of 10 starts with three seconds. Luckychris competed at Harrah’s Hoosier Park for a short stint before returning to the ISFC for a win at Goshen in late July. He will start from post seven for trainer Curtis Rice.

The Governor’s Cup Championships will be the grandstand attraction at the Indiana State Fair Thursday. The program will be preceded by the Grand Circuit, including the 95th Fox Stake on Wednesday, Aug. 11 beginning at 6 p.m. Full programs for both days are available on the ISA Website at www.indianaharness.com.