Big Gulp has been nothing short of impressive in all of his starts this year. He extended his win streak to seven Saturday, Aug. 29 to remain undefeated. 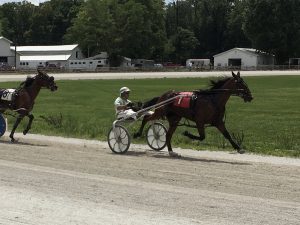 Big Gulp, shown earlier this year at Shelbyville,  is a perfect seven for seven for the Yoder family and trainer-driver Jay Cross. Photo by Tammy Knox

A gelded son of Always a Virgin, Big Gulp’s latest win was a gate to wire effort at the Clinton County Fairgrounds. The freshman, driven and trained by Jay Cross, pulled away in the second half to score the victory by six and three-quarter lengths in 2:02.0. Keep’s Admiral and Michael Detweiler finished second over My Little Buddy and Alex Udell for third.

Owned by Michael Yoder of Shipshewana, Ind., Anna, McKenzie and Ben Yoder of Goshen, Big Gulp is a homebred contender. He was bred by Ben Yoder. He now has more than $11,000 in earnings and his best time was taken at the Indiana State Fairgrounds in 1:53.0.

Another impressive freshman on the day at the Clinton County Fairgrounds was Always a Miracle, trained and driven by Matt Rheinheimer. The two-year-old daughter of Always a Virgin turned in a gate to wire effort also in 1:58.4, the fastest two-year-old race of the day and one of only a handful under the 1:59 time barrier. Always A Miracle was a three-quarter length winner over Cruisin Pearl and Joey Putnam followed by Faithfuldawn and Don Eash.

Always a Miracle is owned by William Huggins of Wolcottville, Ind. She was bred by Huggins and Paul Webb. She now has seven wins in eight starts with a best time taken in a qualifier at Harrah’s Hoosier Park in 1:57.4. Her only defeat was a second-place finish in Indiana Sired Fair Circuit (ISFC) action at Shelbyville.

The ISFC moves to its final preliminary round Friday, Sept. 4 before the Governor’s Cup Championships at the Indiana State Fairgrounds Thursday, Sept. 10.