A new year, new connections and a new state. Big Gulp, who went nearly undefeated at two in Indiana, turned in his first qualifier of 2022 at Miami Valley Raceway Friday, Jan. 7. The now four-year-old Always a Virgin was guided by new trainer Walter Haynes Jr. in the impressive return to racing. 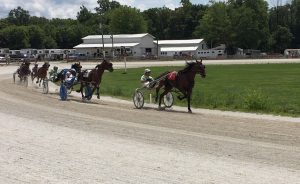 Big Gulp, shown as a two-year-old with driver Jay Cross, turned in an impressive qualifier in Ohio Friday, Jan. 7 to prepare for his four-year-old campaign. Photo by Tammy Knox

Bred by Ben Yoder of Michigan, Big Gulp kicked off his racing career under the direction of trainer-driver Jay Cross for the Yoder family. He won his first eight races on the Indiana Sired Fair Circuit and was a dominant force heading into the Governor’s Cup Championships. A mishap in the final, which he also won, placed him out of the money and was his only loss of the season as a freshman. He returned later in the fall and won his pari-mutuel debut at Harrah’s Hoosier Park before taking a break from racing.

As a three-year-old, Big Gulp went straight into Indiana Sires Stakes action and finished third in his first start of the year, pacing in 1:51.3. He continued to compete at a high level all season, winning in 1:49.4 before being sold to Jeff Fought Racing and Brian Carsey. He made four starts at the end of Hoosier Park’s meet, winning his final race with Sam Widger in the bike.

The start in the qualifier Friday marked the first time on a track outside of the state of Indiana for Big Gulp. He had an outside post and shot straight to the lead for Haynes Jr., opening up at the three-quarter mile marker in 1:26.3 and rallying home in :28.1 for the 16 and three-quarter length win in 1:54.4. Nice Trip, a 10-year-old daughter of Indiana sire Jereme’s Jet, finished second for Shawn Barker II with Triple Lane Mister and Scott Ferguson finishing third.

Big Gulp heads into his four-year-old season just shy of $100,000 lifetime. The homebred gelding from the Yoder Family Farm is the final foal from the Armbro Mackintosh mare Astra Destiny. She is a near 100 percent producer with Mandy’s Mattjesty her richest with $300,000-plus in earnings. Mandy’s Mattjesty is the dam of Ponda Hawk, who is part of the impressive first crop by Luck Be Withyou and took a mark of 1:52.0 this season. Ponda Hawk has a full brother, Adam Twelve, who is a two-year-old for the upcoming season at Harrah’s Hoosier Park. He was purchased out of the Hoosier Classic Yearling Sale for $9,000 under the name, Ponda Puff.

Big Gulp is now the fastest foal by Astra Destiny with his 1:49.4 mile. In all, she has produced four with six-figure earnings on their card out of six total.