Two Indiana sired horses rallied all the way to the wire Thursday, March 3 with Big Gulp getting the last surge for the win over Rockin Ron. The four-year-old gelding stopped the timer in 1:52.4 in the $20,000 conditioned pace. 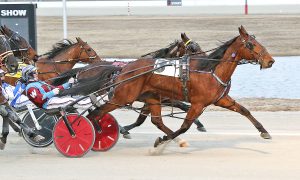 Big Gulp and Sam Widger got past Rockin Ron in the final strides Thursday, March 3 at Miami Valley Raceway. Photo by Conrad Photography

Starting from post three, Big Gulp and Sam Widger got away in mid pack as Rockin Ron and Chris Page rallied out to the lead from post one, setting fractions of :28.2 and :56.3 before feeing the heat from Big Gulp, who was first over just after the half. Big Gulp had caught up with the leader by the three-quarter mile marker in 1:24.3 and the race was on.

Both Big Gulp and Rockin Ron dug in gamely for the stretch drive. In the end, Big Gulp moved past Rockin Ron on the outside for the win by a neck over Rockin Ron. Sugar Shock and Tony Hall moved up late for third.

Big Gulp paid $4.80 for the win. The Always a Virgin gelding is trained by Walter Haynes Jr. for owners Jeff Fought Racing and Brian Carsey. The gelding, who was campaigned by the Yoder family under the direction of trainer-driver Jay Cross at two and three, was bred by Ben Yoder of Michigan.

Big Gulp now has three wins and two seconds in seven starts with only one of those outings off the board in 2022. Overall, he has 17 career wins in 37 career starts with more than $141,000 in career earnings. His career best time was taken as a three-year-old last year at Harrah’s Hoosier Park in 1:49.4. Big Gulp went undefeated on the Indiana Sired Fair Circuit as a two-year-old before venturing to the pari-mutuel ranks.

Another winner on the Thursday card at Miami Valley Raceway was E Mode’s Desire and owner-trainer-driver Mike Peterson. The six-year-old son of Real Desire got away third behind Bluebird Recon and Trace Tetrick and Just a Start and Tyler Smith through fractions of :27.2 and :55.2 before being flushed to the outside at the three-quarters in 1:23.2.

E Mode’s Desire paid $5.80 for the win. Bred by David Yoder, the gelding earned his third win of 2022 in his seventh start of the year. Overall, he has 22 wins in 85 starts and more than $185,000 in earnings. He has spent his entire career in the Peterson barn with his career best time taken last year as a five-year-old at Harrah’s Hoosier Park in 1:49.1.