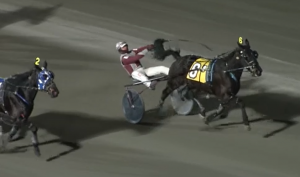 Big Bad Swan and Joe Bongiorno fend off It Aint The Whisky at the finish in conditioned trotting action at Yonkers Wednesday, Jan. 26.

Starting from post six, Big Bad Swan left the gate quickly to get to the lead as Hobbs and Scott Zeron joined them on the inside along with race favorite It Aint the Whisky and Jim Marohn Jr., who had better gate positioning from the three hole. Big Bad Swan never let up, reaching the top and passing over to the lead before the quarter in :28.3. From there, he controlled the tempo of the race through middle fractions of :58.3 and 1:27.1.

Big Bad Swan paid $11.40 for the win. The six-year-old gelding is trained by Cad Gregory and owned by Triple D Stables and Betty Clegg, who acquired him last summer. Bobby Brower and DM Stables bred the Swan for All son, who earned his first win of the year in his second start of 2022. Overall, Big Bad Swan, who lives up to his name as a big trotter, has 12 wins in 75 career starts. His career best time was taken last year at five in 1:55.4 at Yonkers.

Big Bad Swan is out of the Yankee Glide mare Lasting Beauty, who raced for Brower before becoming a brood mare. He is a half brother to Fearless Man, a son of Elegant Man who has a mark of 1:52.1 and more than $700,000 in earnings.

Big Bad Swan was a $62,000 yearling purchase from the Hoosier Classic Yearling Sale. He has a three-year-old sister by Whom Shall I Fear named Fear Her Makeup. She did not race last year at two.