Big Bad Jane, hailing from the Tyler George Stable, barreled down the lane to take top honors in the $18,000 Fillies and Mares Open Pace Saturday, Aug. 8 at Harrah’s Hoosier Park. The Ohio bred mare was driven to victory by the track’s all-time leading driver Trace Tetrick. 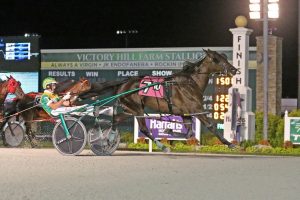 An outside post of seven didn’t help get good early positioning for Big Bad Jane, who moved over to the pylons and trailed the field of eight through the first quarter in :26.3. Queen of the Price and Brandon Bates led the way with Rockin Nola and Joey Putnam reaching that spot by the halfway point in :54.1. Big Bad Jane had moved out down the backstretch to get into the outer flow, and was slowly moving up on the outside to try to get into position for the final quarter.

In the stretch, Big Bad Jane began to kick into another gear and had the best momentum, reaching the finish line in 1:50.0 with a final panel in :27.0. Fully A Virgin and Michael Oosting finished two and one-quarter lengths back in second followed by Queen of the Pride, who came back to finish third.

Owned by Sandra Burnett, who is down as breeder with Chip Noble, Big Bad Jane earned her fifth win of 2020 in 11 starts and established a new lifetime mark with the win. The six-year-old Big Bad John mare now has in excess of $375,000 in career earnings.

Earlier in the night, Trainer Jeff Cullipher had a pair of horses bring in wins in the co-featured events. Wisdom Tree and Sam Widger were winners by a neck in the $12,500 Fillies and Mares Open 3 in a time of 1:51.2 while Resita and Widger picked up a gate to wire win in the $12,500 Open 3 Trot in 1:53.2. Both horses are co-owned with Tom Pollack and Cullipher.

Jamie Macomber is currently leading the trainer standings this year at Harrah’s Hoosier Park with 30 wins through Saturday, Aug. 8. Cullipher and George are tied in second place with 29 wins followed by Erv Miller with 20 wins.

Trace Tetrick is well on his way to another leading driver title. Through Sat. Aug. 8, he has 109 wins, 45 ahead of second place driver Sam Widger at 64. John DeLong is currently in third place with 53 wins.

Swan in Motion is leading in wins for the season. The Macomber-trained three-year-old colt by Swan for All is a perfect five for five this season at Harrah’s Hoosier Park.