A talented field of six fillies and mares came together for the featured $18,000 Open Pace for older pacing mares Saturday, Aug. 15. The evening was a continuation of Dan Patch Festival Weekend at Harrah’s Hoosier Park. Bettor’s Up and LeWayne Miller scored the win in a time of 1:51.4. 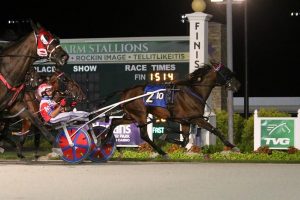 Starting from post two, Miller got Bettor’s Up out of the gate quickly to sit right behind Ideation Hanover and John DeLong, who set fractions of :28.1, :56.4, and 1:24.4. Several females began to get revved up for the stretch drive and began to challenge. Bettor’s Up was able to use her early positioning to her advantage through the inside and got under the wire first, a final panel paced in :26.4. Fully A Virgin and Michael Oosting turned in the quickest final quarter of all in :26.0 to close in gamely for second over Rockin Nola and Joey Putnam, who finished third.

Bettor’s Up is nearing $1 million in career earnings with 22 career wins in 85 career starts. She was named the O’Brien Three-Year-Old Pacing Filly of the Year in 2017 after winning several major stakes, including the Pegasus at Harrah’s Hoosier Park. Platinum Stables acquired her earlier this spring. She has now won her last two starts.