Bettors Up has been with the LeWayne Miller Stable for over a year. She notched her sixth win for the stable in the $16,000 Fillies and Mares Open Saturday, May 1 and in the process, moved over the $1 million mark in earnings to become the sport’s newest millionaire. 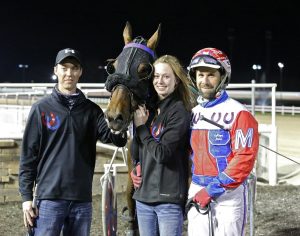 Bettors Up became the sport’s newest millionaire in the Fillies and Mares Open III pace Sat. May 1 at Harrah’s Hoosier Park for the LeWayne Miller Stable. Photo by Dean Gillette

Bettor’s Up and Miller started their journey from post four and floated over to the rail as Checks On The Way and Trace Tetrick pursued the lead, securing the top spot after the quarter in :27.1. Bettor’s Up took advantage of a second row forming down the backstretch and followed cover to the top of the stretch.

At that point, Bettor’s Up unleashed a final panel in :27.2 to move to the lead and secure the win in 1:51.2, one and one-quarter length ahead of Checks On The Way and Grace Rocks with driver Joey Putnam, who finished in a dead heat for second. Bettor’s Up paid $6.60 for the win.

Platinum Stables of Grabill, Ind. purchased Bettor’s Up last March. The seven-year-old mare by Bettor’s Delight was bred by Brittany Farms and will be earmarked for brood mare status at the end of her racing career.  She now has 26 wins in 108 starts and more than $1 million in career earnings. Her career best time of 1:49.4 was taken as a three-year-old at Mohawk. She raced primarily in Canada before being acquired by the Miller Stable last March. She shows pacing in 1:48.3 at The Meadowlands as a five-year-old., and was the O’Brien Three-Year-Old Pacing Filly of the Year in 2017.