Four divisions of the Thanksgiving Classic were held Friday, Nov. 25 at Harrah’s Hoosier Park and three were won by Indiana sired horses. The first division of the sophomore event placed the spotlight on the three-year-old filly pacers and the lone Indiana sired filly scored the win. 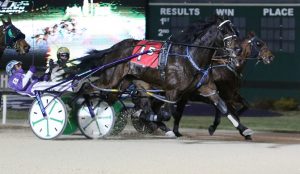 Best Place to Be and Brandon Bates scored the win in the Thanksgiving Classic for three-year-old pacing fillies Friday, Nov. 25. Photo by Dean Gillette

Best Place to Be and Brandon Bates were not tagged as one of the favorites of the $53,000 Thanksgiving Classic with several Grand Circuit horses in the field, including Galleria Hanover. But with the inside post one, Best Place to Be was able to get into the mix early and set the first fraction of :26.4 before Patsville and John DeLong circled to the lead before the half in :55.0. Patsville continued to lead the way as Galleria Hanover moved up first over around the final turn for driver Sam Widger.

In the stretch, Best Place to Be angled out and went to work, catching Patsville in the final strides for the win in 1:51.3. Patsville was a half length back in second in the three-horse photo while Captains Princess and Devon Tharps finished third.

Best Place to Be paid $25.40 for the win. The Always a Virgin three-year-old is owned by William Rufenacht and DM Stables LLC of Ohio. The owners also bred the filly, who is trained by Mike Roth.

It was the fifth win of the season for Best Place to Be, who now has more than $150,000 earned this year and nearly $200,000 lifetime. She took her career best time of 1:50.3 earlier this year at Harrah’s Hoosier Park. Best Place to Be is a full sister to the standout gelding Always at My Place, who has a mark of 1:47.2 and more than $1.2 million in earnings. The maternal family of Best Place to Be are all racehorses with the dam, Best Place, a 100 percent producer with the exception of one mare. Out of eight foals, six have earnings in the six figure range with three over the $200,000 mark.

In the sophomore pacing colt and gelding category, Ponda Warrior was an easy winner by two lengths in the quickest mile of the night in 1:49.3. Driven by John DeLong, the Rockin Image colt capped off a tremendous three-year-old campaign with the win over Rip Wheeler and Trace Tetrick. Yourwishisgranted and Kyle Wilfong finished third to make it an Indiana sired trifecta.

Owned by Jay Hochstetler, the trainer, and Finkelberg Racing LLC and South of the Tracks Rac, Ponda Warrior ends his three-year-old campaign with six wins in 18 starts and more than $360,000. His career best time of 1:49.1 was taken in May at Harrah’s Hoosier Park.

Ponda Adventure won the three-year-old trotting colt and gelding ranks of the Thanksgiving Classic in a time of 1:53.3. Moving to the lead after the half, the Swan for All gelding driven by Trace Tetrick trotted home in :28.1 for the win by one and one-quarter lengths. Swan Flyer and John DeLong finished second over Caviar Gold and Brandon Bates for third.

Ponda Adventure is owned by Engel Stable of IL, Louis Willinger, and Jery Graham. Erv Miller trains the standout trotter, who is 14 for 18 this season and 22 for 28 lifetime. His earnings are now in excess of $685,000.