Bentley Blu and Brett Miller turned in a red hot effort Wednesday, Feb. 2 at Miami Valley to score the win in conditioned pacing action in 1:57.2. The Indiana sired trotter endured a tough trip to score the win. 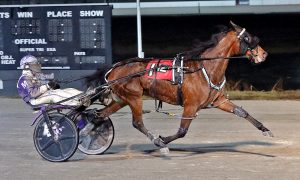 Bentley Blu turns in an impressive win at Miami Valley Wed. Feb. 2 with Brett Miller in the bike. Photo by Conrad Photography

Starting from post one, Bentley Blu got away in fourth as Boom Dynamite and Josh Sutton romped out to the lead early, establishing early fractions of :29.0. Heading to the half, Bentley Blu was flushed to the outside in first over fashion and had to endure a first over journey through the half in 1:00 and three-quarters in 1:28.0. By the time the field was halfway through the turn, Bentley Blu took over and lengthened his stride, placing open lengths between him and the rest of the field. Bentley Blu trotted home in :29.2 for the three and three-quarter length win at the wire. Cheesy Hanover and Tyler Smith finished second over Indiana sired ER Nelson and Bradley Ferguson for third.

Bentley Blu paid $8.00 for the win. The Mr Cantab five-year-old is owned by Crawford Farms Racing of New York and was bred by Misty Ridge Stables LLC of Indiana. He is now two for three in 2022.

After not racing as a two-year-old, Bentley Blu earned his career best time of 1:56.2 at three at The Meadows. He has been owned by Crawford Farms Racing for the duration of his career. He was transferred over from the Burke Barn after his two-year-old campaign to trainer Stacey Van Huizen, who has trained him to all six of his career wins. He now has more than $40,000 in purse earnings and has been placed on the Full Circle list, denoting he has contact information on file for aftercare.

Bentley Blu is a half brother to Compelling, the standout trotting mare from the Verlin Yoder barn who has more than $300,000 in earnings. He was the highest priced yearling by Mr Cantab, selling for $25,000 at the Michiana Classic Yearling Sale in 2018. He sold under the name Two Tabs before being changed to Bentley Blu. He was only one of 16 foals by Mr Cantab sold at auction that year.