Bellacache and Ricky Macomber Jr. turned in a tough performance Wednesday, Dec. 15 to score the win at Pompano Park in the $7,300 claiming event for fillies and mares. The Indiana sired mare scored the win by one-half length in 1:55.0. 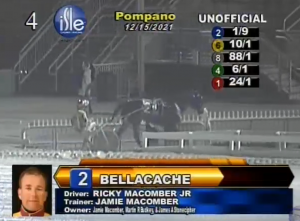 Starting from post two, Bellacache was a contender from the start, getting away in third as Gypsy Merlot and Ken Holliday moved to the lead after the quarter in :27.1. From there, Bellacache waited patiently and moved to the outside around the final turn to begin her attack on the front.

In the stretch, Bellacache dug in gamely and took over midway through the lane, fending off Ourlittlemiracle and John MacDonald, who got a perfect two-hole trip. Gemalous and Braxten Boyd closed well late to finish third.

Bellacache was the heavy favorite of the field, paying $2.20 for the win. The Aracache Hanover five-year-old is trained by Jamie Macomber and owned by her along with Martin Budkey and James Stonecipher. The mare was bred by the University of Illinois veterinary school program. She now has 11 career wins in 88 career starts. Her best time of 1:51.2 was taken earlier this year at Harrah’s Hoosier Park in 1:51.2. She now has more than $118,000 in career earnings and has been with the Macomber barn since December of 2019.