He’s known for upsets. He’s known for getting better and stronger as the year goes on. So, anyone that follows Beckhams Z Tam, last year’s winner of the Breeders Crown for three-year-old pacing colts and geldings probably weren’t surprised to hear the four-year-old horse was an upset winner in the $200,000 Prix D’Ete Sunday, Aug. 19 at Hippodromo Trois Rivieres in Quebec. 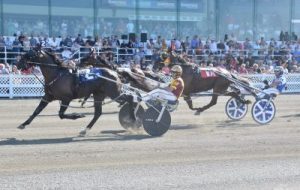 Beckhams Z Tam and Ricky Macomber cruise to victory in the $200,000 Prix D’Ete at Three Rivers in Quebec Sunday, Aug. 19. (Photo by Thephotodesk.ca)

Handled by the husband and wife team of Ricky and Jamie Macomber, Beckhams Z Tam was attempting his first race over a half-mile track with Ricky in the bike. Filibuster Hanover and Louis Roy was part of a two-horse entry in the race and was the favored choice by the betting public, so he left the gate with confidence to lead the field through the first panel in :26.3. Blood Line and Doug McNair were caught out and applied pressure to Filibuster Hanover to keep the tempo lively, but it also forced Ricky to tip Beckhams Z Tam three wide before the three-quarter pole in 1:23.2 to get around the top two. Beckhams Z Tam rallied home to a final quarter in :28.4 to earn the win in 1:52.1, one and one-half lengths over American Wiggle and Guy Gagnon. Filibuster Hanover finished third.

Beckhams Z Tam earned his second win of the year in his 10th start of 2018 for Z Tam Stables of New York, NY. The son of Always A Virgin increased his career bankroll to more than $673,000 with the win. 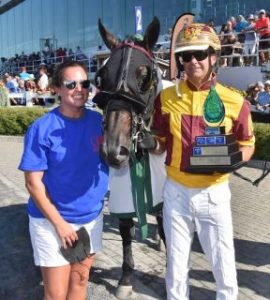 “When we found room and got into second-over position going to the half mile, I felt pretty confident, I knew we could make that big move in the backstretch,” said Ricky through a press release from Hippodromo Trois Rivieres. “After we got second over position, I waited until the backside and then flipped three-deep and continued on going. My wife had more confidence in racing him on a half mile track than I did. Now after the race I feel pretty good about it.”

Jamie, who is now in her second full season with her own stable, tied for leading trainer at Hoosier Park last season. She is currently in second place for 2018, and continues to crank out competitive horses like Beckhams Z Tam.

“He (Beckhams Z Tam) made the ship so well from Indiana to Quebec,” said Jamie through the press release. “He has eaten all his food, drank more water than I have ever seen him do and that made me feel confident and that he was in good shape. I did warm him up pretty hard. I was really mad with myself for doing it, but he responded well. I also need to thank Ron Burke, as he was the one last winter who convinced me to enter Beckhams Z Tam in the Prix D’Ete.”

The win in the Prix D’Ete was the 13th trip to the winner’s circle in 36 career starts for Beckhams Z Tam, who is named after soccer star David Beckhams. He earned a new lifetime marker earlier this year at Hoosier Park in 1:49.0.