Beach Journey and Wally Hennessey turned a perfect trip into a winning one Tuesday, April 13 in the evening’s featured $11,500 Fillies and Mares Open Pace at Isle of Capri Pompano Park. The duo stopped the timer in 1:52.4. 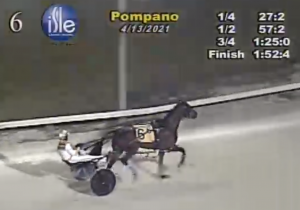 Starting from post six, Beach Journey left with some speed to secure the spot right behind favorite Casie’s Believer and Joe Chindano Jr. They followed along through fractions of :27.2 and :57.2 before being covered up on the outside by first over foe Roll With Angel and Braxten Boyd. Around the three-quarter pole, it appeared Beach Journey might not find the racing room she needed as she was locked in along the inside.

In the stretch, space opened up and Beach Journey hit another gear to pace on by the favorite for the win by one and one-half lengths. Casie’s Believer finished second while Tempus Seelster and David Ingraham closed well for third.

Owned and trained by Cory Kreiser of Pittsburgh, Pa., Beach Journey paid $9.60 for the win. The Net Ten EOM five-year-old mare was bred by Nathan Eicher of Spencerville, Ind. And now has six wins in 14 starts this year. The mile was a new career best for Beach Journey, who increased her bankroll to more than $78,000. She recently joined the Kreiser barn a month ago and since arriving there, she has won three and finished second twice in five starts.