Beabob’s Bear and driver Dale Hiteman rallied home as the winners in the $25,000 I-69 Final to close out the 2019 season at Harrah’s Hoosier Park. The Indiana sired gelding also earned his 10th win of the year at the Anderson, Ind. track and his third consecutive trip to the winner’s circle. 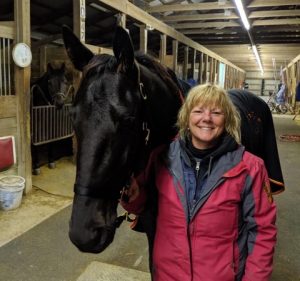 Trainer Sally Gilbert stands with Beabob’s Bear after his 10th win of the meet at Harrah’ Hoosier Park on closing night Saturday, Nov. 9.

Trained by Sally Gilbert, Beabob’s Bear was tagged as the favorite due to wins in the two preliminary rounds. The four-year-old son of Swan for All got away near the back of the pack as Foxy Trottin Stick and Ricky Macomber set early fractions. Beabob’s Bear used a final quarter surge to move into the lead and grab the win in 1:54.4. Chestnut Rose and Andy Shetler finished second over Martini Show and Sam Widger for third.

Owned by breeders Larry and Le Anna Muckenhirn, Beabob’s Bear increased his bankroll to more than $81,000 with his win. The lightly raced two-year-old Indiana trotter really found his stride as an older trotter only missing the top three finishers one time in 15 starts for 2019. His career best time of 1:53.3 was taken in late September. Beabob’s Bear was also a winner in the $21,250 Final of the Oxford Indiana earlier in the season for his connections.

Beabob’s Bear is out of Muckenhirn’s tough race mare Deputy Julianna, who earned in excess of $119,000 and took a mark of 1:55.2 as a three-year-old at Indiana Downs. She was very versatile during her career, winning the Indiana Sired Fair Circuit Championship at three at the Indiana State Fair and also competing in Indiana Sires Stakes action on the pari-mutuel level.

Known for her expertise with trotters, Gilbert adds Beabob’s Bear to her impressive list of conditioned trotters. She is also the conditioner of Captain John Henry, who has earned in excess of $300,000 and is still competing at the age of 10.