Driver Billy Davis Jr. had back to back Indiana sired winners at Northfield Park Tuesday, May 3. He guided trotter Swan Country to victory followed by a trip to the winner’s circle with Be A Lucky Star in conditioned pace action. 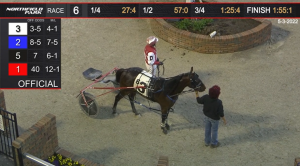 Be a Lucky Star visited the winner’s circle for the first time in 2022 and was one of two winners on the card for driver Billy Davis Jr.

Starting from post three, Be A Lucky Star went out for the lead from the start but had to work to get there. He was hung three wide in the first turn before crossing over to the lead just before the quarter in :27.4. From there, Davis had a snug hold on the Luck Be Withyou gelding through middle fractions of :57.0 and 1:25.4.

Be a Lucky Star paid $3.40 as the favorite of the field. It was his first win of 2022 in his third start, and the mile recorded in 1:55.1 was a new lifetime mark for the three-year-old. He is owned by Mark Wright of Frankfort, Ky. and trained by Brian Loney. Ernie Graber bred the gelding, who is from the first crop of Luck Be Withyou.

Earlier on the card, Swan Country turned in a game effort for the win in 1:57.4. Also driven by Davis Jr., the five-year-old son of Swan for All sat second early on before rallying in the stretch to win by three-quarters of a length over TT’s Chipster and Jason Thompson. Hititoutofthepark and Ronnie Wrenn Jr. finished third.

Swan Country paid $6.80 for the win. The Indiana trotter is trained by Ashley Burke and owned by Gretchen Smith.  Stacey, Harold and Beverly Ruddick bred the gelding, who now has two wins in 2022 and 10 wins overall. His career best time was taken at three at The Meadows in 1:55.0.