BB Lucky Boy splashed through a driving rainstorm Tuesday, Dec. 6 to win a high-end conditioned pace with a purse of $21,000. The Indiana sired gelding scored the win in 1:52.4. 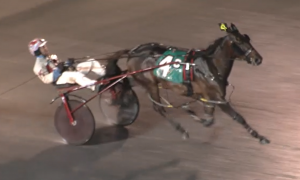 BB Lucky Boy began his journey from post four and was moved to the inside path by driver Matt Kakaley in third as Smokin By N and Joe Bongiorno took over the early lead around the first turn. BB Lucky Boy had a big hold on Kakaley so he decided to move the sophomore pacer out and let him pace to the front, clearing just after the quarter in :28.0. Once on the lead, BB Lucky Boy was strong, and showed he would continue to set the pace for the field through the half in :56.4. Heading to the three-quarter mile marker, Smokin By N was having trouble keeping up, which pushed Mach N Cheese and Brent Holland to the outside to challenge. BB Lucky Boy took advantage of the traffic jam behind him and opened up on the field by four around the final turn.

In the stretch, Kakaley kept BB Lucky Boy alert to the wire for the win by one and one-half lengths over Mac N Cheese, who closed late for second. Son of a Tiger N and Jordan Stratton finished third.

BB Lucky Boy was the favorite, paying $3.50 for the win. The Luck Be Withyou gelding is owned by Eric Prevost and trained by Brett Pelling. Martin Schmucker bred the three-year-old, who earned his eighth win of the year and his 10th overall. He began his racing career in Indiana last year before moving to the East Coast where he took his career best time of 1:49.1 earlier this year at Pocono Downs. His latest win puts him over the $100,000 mark now in 30 starts.

BB Lucky Boy comes from a strong maternal family in Indiana as his mother, Lets Go BB, is a full sister to the standout pacing mare Go On BB, who earned more than $1.4 million during her career and took a mark of 1:50.0. She was campaigned by the Ron Burke Stable during her dominant years on the track in Indiana.

Go On BB is now a brood mare and has produced five winners out of six of racing age. Her quickest is Going Gone Hanover with a mark of 1:51.0 and $132,000 in earnings. Go On BB has a yearling filly who will be on the track next year named Gotta Bet Hanover, by Betting Line, and a weanling colt named Gold Glove Hanover by Papi Rob Hanover, which is the fifth sire she has been bred to out of eight foals.