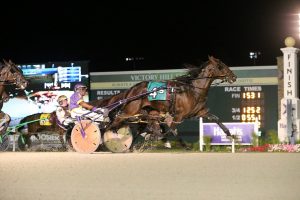 Starting from post four, BB Lucky Boy didn’t use any early speed and moved to the inside as Mystic Waze and Trace Tetrick established the first quarter in :26.2. Imalwaysclassy and Brandon Bates moved out and around to the lead before the half in :55.1, which caused a second tier to begin heading into the final turn. Imalwaysclassy held his ground on the front as BB Lucky Boy found second over cover behind Gold Star Sven and James Yoder.

In the stretch, Ross tipped BB Lucky Boy to the outside and he paced home in :27.2, winning by three-quarters of a length over Odds On Alpha Male, who closed well for Peter Wrenn. Imalwaysclassy finished third.

BB Lucky Boy paid $17.20 for the win. The freshman ridgling by Luck Be Withyou is trained by Robert Taylor and is owned by Larry Poindexter of Tennessee. Martin Schmucker bred the colt, who earned a new lifetime mark with the effort. He is now two for 10 in his career.

BB Lucky Boy was one of 85 foals registered out of the first crop of Luck Be Withyou. He is among the top 10 in performers of the group and is out of the mare, Lets Go BB, who earned more than $100,000 during her career and took a mark of 1:56.2. He is a half brother to Northern Network, who is racing in Indiana this year. Lets Go BB is a full sister to Go On BB, the standout pacing mare from the Burke Stable who earned a mark of 1:50.0 and more than $1.4 million in earnings before she retired in 2013.