Action for the final week of racing in 2021 at Harrah’s Hoosier Park got underway Thursday, Dec. 2 with driver Brandon Bates winning the early double. Both winners, Rocking Retirement and Motoring Michael, were mild longshots.

Bates started off his night with a win behind Rockin Retirement. A start from post two got him near the leaders early on with a garden seat spot behind race leader Grab N Go and LeWayne Miller through the first quarter in :27.2. From there, Raes Lucky Charm and James Yoder made their bid to the lead and remained on the outside through the half in :56.3 and three-quarters in 1:25.4. 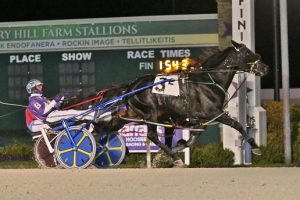 Motoring Michael was the second half of the early double for driver Brandon Bates Thursday, Dec. 2 at Harrah’s Hoosier Park. Photo by Dean Gillette

Bates was able to find the room he needed to advance with Rocking Retirement and score the win by a half length over Grab N Go in 1:55.0. Sullenberger and Casey Leonard finished third.

Rocking Retirement paid $21.40 for the win. The five-year-old son of Rockin Image is owned and trained by Cassidy Whitton. It was the fourth win of the season for the gelding and a new career best time. He raced on the Illinois fair circuit prior to relocating to Harrah’s Hoosier Park.

Bates was back in the winner’s circle in race two with the Ernie Gaskin-trained Motoring Michael. Bates let the field settle early on with Dirty Judge and Sam Widger leading the way through the quarter in :27.1. Motoring Michael was on the move on the outside and was eventually first over at the three-quarters in 1:26.0.

Motoring Michael overtook the leader early in the lane and was clear to the wire for the win in 1:54.3, a final quarter in :28.3. Dirty Judge finished second with Simply Outstanding and Trace Tetrick maintaining ground for third.

Motoring Michael paid $14.80 for the win. The sophomore son of JK Endofanera is owned by Spectacle Stable and was bred by David Yoder. It was the third win of the season for Motoring Michael and the first time Bates had been in the driver’s seat.