Base Stealer and driver Trace Tetrick stole the show in the $25,000 Peruvian Final Thursday, Sept. 29 at Harrah’s Hoosier Park. The duo scored the win in 1:53.0. 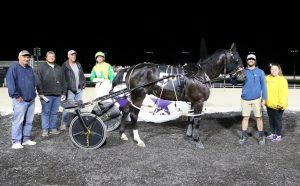 Base Stealer and Trace Tetrick are joined by the Loney Stable following his win in the Peruvian Final at Harrah’s Hoosier Park Thurs. Sept. 29. Photo by Dean Gillette

Starting from the center of the track, Base Stealer took a big swing out of the gate to the lead, but was beat to first base by Altar Boy and Joey Putnam in :27.1. From there, Tetrick, who was celebrating his birthday, moved out and around to take over at the half in :55.3. Base Stealer settled in well on the front end and posted the three-quarters in 1:24.1 to keep up the tempo of the race.

Base Stealer was the favorite, paying $2.60. He was greeted in the winner’s circle by the Loney Stable. Donna Loney trains the freshman son of Rockin Image for owner Mark Wright of Kentucky. Freddy Darby of Virginia is the breeder on the colt.

The win was a new lifetime mark for Base Stealer, who now has 15 starts this year with more than $26,000 on his card. He is out of the Four Starzzz Shark mare Star Perfect and was a $23,000 yearling purchase last fall by Wright from the Hoosier Classic Yearling Sale.

The Peruvian Final was named after a part of history at Harrah’s Hoosier Park. The first winner of the Indiana Derby in 1995 was named Peruvian, ridden by Dean Kutz. Peruvian went on to stand at stud with several of his foals racing in Indiana.

Another impressive two-year-old pacing win on the night was recorded by Art It Is. The Tellitlikeitis gelding sat patiently in the two-hole for driver Sam Widger as Lotsa Knock Us and Jared Finn established fractions of :27.3, :56.1 and 1:24.3 before tipping out to challenge.

In the stretch, Art It Is paced home in :27 seconds to score the win by three-quarters of a length in 1:52.0. Lotsa Knock Us was second over Joker Rockwell and Brandon Bates, the latest foal from the Nora Rockwell maternal line of talented horses.

Art It Is paid $2.80 for the win. He is owned by Dolne Farm Services LLC, Therese DeFabis and Mark P’Pool, who also trains. Legacy Acres bred the gelding, who moved over the $100,000 mark for earnings with the win. The gelding took a career best time earlier this year in 1:51.2.