The Indiana Standardbred Association (ISA) sent out ballots for the upcoming Director Election. A total of six votes will be collected from all members with one cast for the Northern District, one for the Central District, one for the Southern District and three At-Large positions. Ballots must be postmarked by Saturday, October 26, 2019 to be valid for the election. 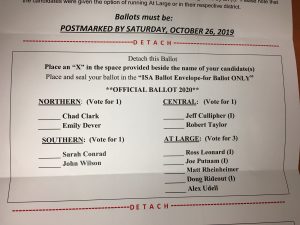 ISA Director Ballots have been mailed out and are due back to a special CPA office in Franklin, Ind., postmarked by Sat. Oct. 26, 2019.

The ballots come in three pieces. The Ballot signature card should be placed in a special envelope and the ballot, which is detached from the signature card, is placed in a separate envelope. Then, both envelopes are placed into an envelope that goes to a firm in Franklin, Ind. to secure and keep all ballots anonymous.