Aztec Hanover and John DeLong were the first pair to score a win during the season opener at Harrah’s Hoosier Park Friday, March 26. The duo won the first division of the Sapphire Prep claiming series to kick off the 28th season of Standardbred racing. 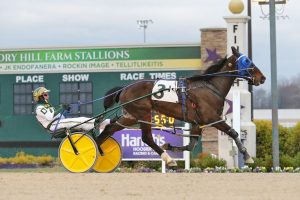 Aztec Hanover was one of three wins on the season opener for driver John DeLong Friday, March 26. The Camluck gelding won the first race of the year at Harrah’s Hoosier Park. Photo by Dean Gillette

Starting from post three, Aztec Hanover floated over to the rail in third and followed Dancin Doug and Mike Peterson to the quarter in :26.2. Southwind Scorpion and Trace Tetrick were rolling by on the outside and took the lead shortly after the first quarter to set the tempo at :55.0 and 1:24.3. In the stretch, DeLong pulled Aztec Hanover to the outside and paced home in :28.3 for the win by three lengths in 1:53.1. Danza and Brandon Bates finished second followed by Wild Goose Chase and Joey Putnam for third.

Aztec Hanover is owned by Tom Luther and trained by Jennifer Redmond. The eight-year-old Camluck gelding scored his second win of the season and his 15th overall. His career best time of 1:52.1 was taken at five at Harrah’s Hoosier Park. Aztec Hanover now has more than $129,000 in career earnings. He has been with the Redmond-Luther barn since last fall.

The win with Aztec Hanover was one of three on the card for DeLong, who also connected with Always Relentless in a division of The Sycamore, another claiming series. The five-year-old Always a Virgin gelding came from off the pace in the stretch to score the win by one-half length in 1:54.2. K’s Boy and Brandon Bates finished second over The Last Shark and Michael Oosting for third.

A longshot on the board, Always Relentless paid $26.80 for the win. He is owned by Harold Barrett and trained by Tom T Tetrick.

DeLong also connected with fan favorite Little Rocket Man in the evening’s Open III Pace. Starting from post one, Little Rocket Man opted for a trailing spot early before following cover around the final turn and powering home in :26.1 for the win by one length in 1:50.3. Boiling Oar and Sam Widger finished second over He’zzz A Wise Sky and Kyle Wilfong for third.

Little Rocket Man, owned by Russell Beeman and Jack Freeman, turned in the fastest mile of the season so far. Missy Essig trains the five-year-old gelding by Rockin Image. It was the first start of the year for Little Rocket Man, who moved closer to $300,000 in earnings for his career.