Atoritotell made it two in a row Thursday, April 8 in conditioned claiming action at Harrah’s Hoosier Park. Driven by Michael Oosting, the four-year-old Indiana sired mare scored the win in 1:53.3. 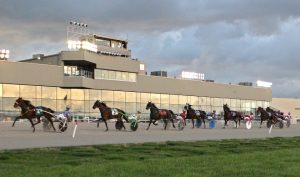 The third race Thursday, April 8 followed along behind Atoritotell heading by the grandstand for the first time. Photo by Dean Gillette

Starting from post six, Oosting moved Atoritotell straight to the lead, with the field following along single file to the first quarter in :27.2. From there, the Tellitlikeitis mare began to open up at every call, pacing home in :28.4 for the win by more than three lengths. Sugar and Spite and Trace Tetrick finished second over Virgin Special and Kyle Wilfong for third.

Trained by Joel Smith, Atoritotell is owned by Paula Smith, James Runyan and Lynwood Romano. Smith, Runyan and Kathleen O’Neill bred the mare. She was claimed out of the race by Douglas Overhiser and Rocco Ruffolo.

Oosting also connected in the first race of the night with Made of Platinum in the Miss Windfall late closer. Trained by Missy Essig for owners Nicholas Catalano, Keith Pippi, Stephen Moss and Timothy Betts, the three-year-old daughter of JK Endofanera got away in the two hole behind Can This Be Real and John DeLong as fractions of :28.0, :57.4 and 1:27.0 were established. Oosting had Made of Platinum in full flight in the stretch, scoring the win by three-quarters of a length in 1:55.1 over Can This Be Real. Miss Lucy Ivy and Joey Putnam finished third.

Made of Platinum was making her first start of the season after only two outings last year at two. The well-bred filly is by Marks-Mindy, the talented mare conditioned by Dan Bowermaster during her career to a mark of 1:52.2 and earnings in excess of $350,000. John Miller of Topeka, Ind. bred Made of Platinum,