Kota’s Swan, the standout three-year-old filly trotter, earned another trip to the winner’s circle Wednesday, Aug. 14 in the fifth leg of the $47,500 Indiana Sires Stakes at Harrah’s Hoosier Park. 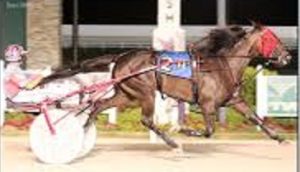 Sprinting away from post three, Kota’s Swan and Sam Widger had an easy journey to the top spot out of the gate and led the field gate to wire, posting fractions of :27.2, :56.4 and 1:25.4. The Swan for All filly trotted home in :29.1 to earn the win in 1:55.0. Always Be With You and Michael Oosting finished a neck back in second over Summit City Swan and Derek Hooley for third.

Kota’s Swan, trained by Jeff Cullipher, is now five for 10 this season. Her career best time was taken in late July in 1:54.2. Pollack Racing LLC and Cullipher co-own the filly, who sold for $47,000 at the Hoosier Classic Yearling Sale in the fall of 2017. Kota’s Swan, who sold under the name Double A Jewell, now has in excess of $200,000 in career earnings.

In the other division of sophomore trotting fillies for the Indiana Sires Stakes, race favorite Measuredperfection and Trace Tetrick were easy winners by three and one-half lengths in 1:53.3. The Swan for All filly, trained by Ron Burke and owned by Burke Racing, Frank Baldachino, J & T Silva – Purnel & Libby and Weaver Bruscemi, recorded her third win in four starts for 2019. Her best time thus far is a mile in 1:53.1. She now has in excess of $234,000 in purse earnings.