With four straight wins, Odds on Osiris is quickly catapulting his way to the top of the ranks among all Indiana sired horses this season. His latest romp, a seven-length victory in the fifth leg of Indiana Sires Stakes action Thursday, Sept. 12, was another track record-setting effort for two-year-old geldings at Harrah’s Hoosier Park. Odds on Osiris previously established the mark in an earlier leg of Indiana Sires Stakes action. 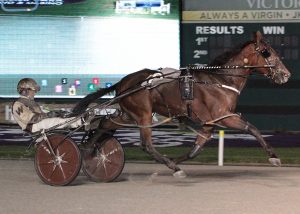 Odds on Osiris and driver Peter Wrenn are now on a four-race win streak and lowered the track record to 1:50.3 for two-year-old pacing geldings Thursday, Sept. 12 at Harrah’s Hoosier Park. (Photo by Linscott Photography)

Starting from an outside post eight in the 11-horse field, the first of two divisions, Odds on Osiris was not pointed to the front by driver Peter Wrenn. Instead, the Rockin Image gelding sat in mid pack before being flushed to the outside in the second half of the race, eventually moving into the lead in first over fashion. In the stretch, the speed began to kick in as he opened up on the field to an eventual win in 1:50.3, a final quarter in :26.3 over the rain-soaked track. Straight Up Cool and Mike Oosting finished second just a neck ahead of Francis Underwood and Sam Widger for third.

“To be honest, I haven’t really figured him all the way out,” said Wrenn through a Harrah’s Hoosier Park press release. “I don’t know how he races best just yet. At this point, he’s still very green. I don’t think he knows how he likes to race best. He just never gets tired, let’s hope he never figures out how to get tired.”

Trained by Melanie Wrenn, Odds on Osiris is now four for six in his career. The Odds On Racing-owned freshman has amassed more than $123,000 in his career thus far. Included in his current string of victories was a win in the Fox Stake earlier this summer at the Indiana State Fair. Odds on Osiris sold under the name Swiss Rocket in the Hoosier Classic Yearling Sale in 2018 for $60,000.