It’s been a standout year for first crop sire Tellitlikeitis. And, 2018 just got a little better Thursday, Aug. 23 in the $75,000 Indiana Sires Stakes final for two-year-old pacing colts and geldings as Ollie’s Ztam and Sam Widger claimed the top prize. Trained by Jamie Macomber, the freshman colt stopped the timer in 1:51.1, which was a new lifetime mark. 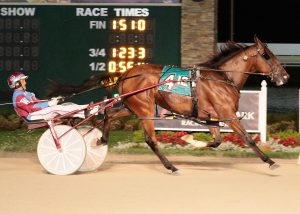 Ollie’s Ztam started in mid pack and pursued the lead, he just didn’t get it until after the quarter mile marker in :27.2 established by heavily favored Outloud, who has been the standout product of Tellitlikeitis all season from the Wrenn barn. Ollie’s Z Tam was able to catch a breather heading to the half in :56.4 before pouring it on around the turn and opening up more than five lengths at one time in the stretch. At the finish, he was four and one-half lengths ahead of Pure Rock and John DeLong for the win. Another product of Tellitlikeitis, Tellmeaboutit and Dale Hiteman finished third.

Ollie’s Ztam, the second choice of the field, paid $7.60, $5.20, $3.60 across the board in only his fourth career start. The homebred colt is owned by Z Tam Stables LLC of New York, NY and Wilbur Eash of Topeka, Ind. The gelding how has three wins in four outings with purse money in excess of $55,000.

“He’s good gaited and he’s got great speed,” owner Wilbur Eash noted in a Hoosier Park press release. “He’s been good since he’s been down here at Hoosier Park but he was still a little immature. I said about a month ago, though; we might have a surprise on our hands.” 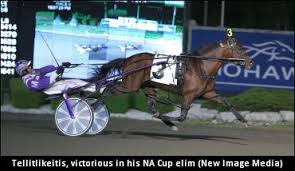 Tellitlikeitis is shown winning an elimination of the North America Cup during his career. The Well Said stallion is producing many winners this season in Indiana in his first crop. (Photo by New Image – Standardbred Canada)

Tellitlikeitis, a half brother to already established Indiana sire Rockin Image, had 76 two-year-olds registered for his debut as a sire in 2018, 44 of which were sold at public auction. So far, 24 of 43 total starters have taken marks under the 2:00 barrier with 12 of those dipping under the 1:55.0 time barrier. In all, the Well Said stallion’s foals have accumulated more than a half-million in purses this summer.

Outloud remains the most successful product of Tellitlikeitis with earnings in excess of $84,000. He now has three (Outloud, Tellitsassymae, Ollie’s Ztam) with times of 1:51.1. Tellitlikeitis stands at Victory Hill Farm for a fee of $3,000.