Once again this season, David Wayne Yoder is prepping numerous pacing yearlings for the upcoming 2019 Hoosier Classic Yearling Sale. Yoder has displayed some of his top prospects over two pages in the October issue of the ISA Magazine. 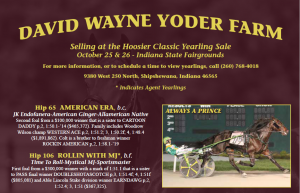 David Wayne Yoder will once again provide a strong consignment in the Hoosier Classic Yearling Sale. Two pages of prospects are offered in the October issue of the ISA Magazine.

Another filly with a strong pedigree is a half sister to Tropical Tracey, the Indiana Sired Fair Circuit Champion freshman pacing filly this season with a mark of 1:55 at the Indiana State Fair. Tellitlikeafra, by Tellitlikeitis, will sell as Hip No. 193. The yearling filly is out of Christine’s Return, a $100,000 winner who has produced six winners and all but one of her nine previous foals have raced. Her quickest son is Mr Terry Fra by Artsplace, who has a mark of 1:50.2 and earnings over the $400,000 mark.

The second day of Yoder’s consignment will include a former Indiana Sires Stakes champ as Marks Mindy will have a JK Endofanera filly available as Hip No. 335. Endo Vicki, is a half-sister to Always Mindy (1:54, $105,930) and her dam, Marks Mindy, is a half-sister to Mykindachip, who earned a mark of 1:49.1 and nearly $1 million during his racing career.

For more information on the consignment from David Wayne Yoder, call (260) 768-4018. The farm is located in Shipshewana, Ind.