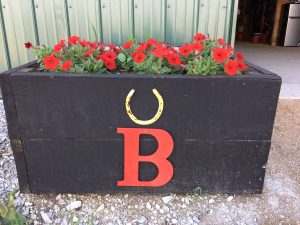 Island of the Sea is now two for two this spring at Harrah’s Hoosier Park for Trainer Shane Bowermaster. Photo by Tammy Knox

Island of the Sea didn’t make it to the races until the end of his freshman campaign. He had three starts on the East Coast, winning the last two under the direction of Eric Ell, who co-owns the horse with Lisa Ell of Denton, Maryland. With a best time of 1:52.1 taken at The Meadowlands, last year, the talent was there and with an arrival in Indiana with the Bowermaster barn, he is ready to display those talents in stakes action this season.

Following a mandatory break due to Covid-19, Island of the Sea made his first Indiana start in a qualifier May 27, winning by two and one-half lengths in 1:51.4 with Michael Oosting in the bike. His second start Wednesday was equally impressive, sitting behind Clever Character and Dale Hiteman for most of the mile before Oosting tipped him out and he rolled home to a two and three-quarter length win in 1:52.2, a final panel in :27.3. Velocity Rukkus and Mark Evers finished second over Clever Character for third.

Island of the Sea was a $46,000 yearling purchase from the Hoosier Classic Yearling Sale. The Ells purchased the gelding last May and patiently waited for him to make it to the races. Island of the Sea is the last registered foal from the swift Jenna’s Beach Boy mare Trinity Islands, who earned a mark of 1:50.3 and nearly $250,000 during her career. She has passed that speed onto her foals with five of six taking marks under the 1:55 time barrier. Her most successful foal to date is Franzo, a son of Rockin Image who has a mark of 1:49.1 and nearly $300,000 in earnings. Her last three foals have been by Indiana sires and Steve Schmucker of New Haven, Ind. is the breeder.

In addition to Indiana Sires Stakes, Island of the Sea is eligible to other stakes, including the Star Destroyer and Pegasus Series at Harrah’s Hoosier Park and the Horseman Stake at the Indiana State Fairgrounds.