Indiana sire Rockin Image had a good night at Harrah’s Hoosier Park Thursday, Aug. 29. He has two of the state’s top two-year-old fillies this season in Priceless and Grace Rocks, who each scored wins in their respective divisions of Indiana Sires Stakes action. 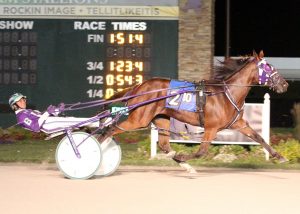 Priceless rallied back in the stretch after leading the way early on to score a win in the first division in a time of 1:51.4. The freshman filly and trainer-driver Brandon Bates rallied back in the stretch to overtake race favorite Foxy Rigger and stride home to a three and one-half length victory with a final panel in :27.3. Owned by Kevin Miller and Bert Hochsprung of Illinois, the win marked the fourth in five career starts and also marked a new career best time. Priceless, who sold under the name of Rockin Diva at the Hoosier Classic Yearling Sale last fall, was purchased for $31,000 and has now earned in excess of $88,000.

The final race of the night brought heavily favored Grace Rocks into the winner’s circle in the second division of Indiana Sires Stakes. Driven by Sam Widger, the Rockin Image filly won her fifth straight race with a trip that brought her to the front from the outer flow to the head of the lane before she challenged Kickin Up My Heels and Trace Tetrick for the lead down the stretch. In the end, Grace Rocks moved into the lead for the win by one and three-quarter lengths in 1:53.2, a final panel clocked in :28.0. Kickin Up My Heels finished second followed by Flirtinwithtrouble and Bates for third.

Grace Rocks is owned by Howard Taylor, an attorney in Philadelphia who purchased part of Swandre the Giant last year. She is trained by Ronnie Roberts and was purchased out of the Hoosier Classic Yearling Sale last fall for $20,000. She has now earned in excess of $90,000.