Swan for All, the top trotting stallion in the state of Indiana for the past few years, is in the homestretch of another successful season in 2019. The Andover Hall horse is currently ranked seventh in North America for trotting stallions in 2019. 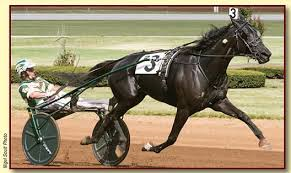 Swan for All is once again the top stallion in the state of Indiana. He is currently ranked seventh in North America for top trotting stallions in 2019. Photo by Nigel Soult

Standing at stud at Victory Hill Farm in LaGrange, Ind. for $6,000, Swan for All has produced numerous standouts over the past seven years, including former Horse of the Year Hannelore Hanover and Breeders Crown champ Fiftydallarbill. This year, he added top two-year-old standouts TJ’s Top Pick and Rock Swan to his credentials. In all, Swan for All is ranked fourth for two-year-olds in 2019, having 53 starters from 83 foals and accumulated purse earnings in excess of $1.5 million.

Also on the list of leading money winning sires in 2019 for two-year-old trotters is Guccio, who is ranked 12th. The Yankee Glide stallion has had 36 starters from 82 foals in the freshman ranks for a total of nearly $700,000 in purse earnings this year. Guccio was an impressive performer on the track, earning more than $1 million. He had several standout freshman performers this year, including May Baby, who earned a mark of 1:53.2 and earnings in excess $225,000. Guccio was sold for $310,000 last January at the Indiana Driving Horse Sale at Michiana Event Center.