Ana Malak N, the successful pacer from Australia that arrived in the U.S. amid the start of the Covid-19 pandemic, scored his first sub 1:50 U.S. win at Harrah’s Hoosier Park Friday, July 10. The six-year-old Bettor’s Delight stallion drove away from the field to win by five lengths in 1:49.4 during the featured Open Pace. 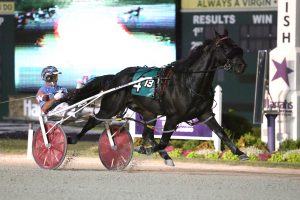 Ana Malak N, driven by Sam Widger, turned in a first quarter time of :26.3 as he moved to the front past the first panel. From there, he got a big breather in the second quarter before picking up the pace for the last half, pacing home in :26.2 for the win. Fan of Terror and John DeLong finished second, just a neck ahead of Castle Flight and Trace Tetrick for third.

Owned by Pollack Racing and Jeff Cullipher, Ana Malak N was making his fourth start in the U.S. since arriving in March. Due to the racing shutdowns and quarantine in place, he went to the Shelby County Fairgrounds and was trained by Jackie Ricks, who works for Cullipher, until the barn area opened up to outside horses and he was able to join the stable. He won in 1:50.3 in late June and came back last week to pace in 1:49.2. His most recent start gives him a sub 1:50 mark for his new connections.

Ana Malak N was featured in several stories emerging from his native New Zealand. He won several of the top stakes “down under” and was sold to the Australian racing circuit where he continued to fare well before being purchased by Tom Pollack and Jeff Cullipher. Pollack and Cullipher, who have purchased a few horses from Australia, also own his full brother, Ana Afreet N, who has a mark of 1:50.0 and is currently racing at The Meadowlands with Cullipher’s East Coast string.