Harness racing could gain its newest millionaire Friday, March 1 as American Girl goes for the win in the $25,000 Fillies and Mares Open at Miami Valley Raceway. It will mark the sixth start of 2019 for the 10-year-old veteran pacing mare, who is sitting on $996,000-plus headed into the event. 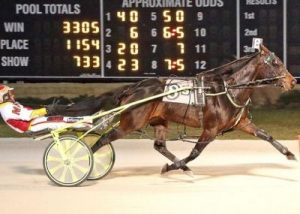 American Girl, an Indiana-sired daughter of Art’s Chip, will attempt to go over the $1 million mark in the $25,000 Fillies and Mares Open at Miami Valley Raceway Friday, March 1. (Photo by Conrad Photography)

Trained by Tyler George, American Girl continues to be at the top of her game among some of the Midwest’s top older pacing mares. She took her career best time of 1:50.3 last year at the age of nine at Dayton, completing the year with seven wins and in excess of $115,000. The Indiana-sired daughter of Art’s Chip has already earned one win this year and nearly $25,000 in earnings. In all, she has won 54 races in 200 career starts with purses of $996,860. A first or second place finish in the Friday race will put American Girl over the $1 million mark.

Owned by Darla Gaskin and Stanley Rosenblatt, American Girl was bred by Gardner Farms LLC of Sheridan, Mich. Tyler George trains the mare who also scored a victory in 1:50.3 as a five-year-old at Hoosier Park where she also was raced timed in 1:49.4 at the age of seven. American Girl has a two-year-old half sister by Always A Virgin who will be on the track in 2019 named Alwaysrememberme.

American Girl starts her 201st career start in the Fillies and Mares Open Pace from the outside post nine. She will be driven by Travis Seekman and is picked fifth at odds of 6-1. Estimated post time for the 10th race is 9:05 p.m. at Miami Valley Raceway.