Always Rockin was an upset winner in the $12,500 Indiana Sires Stakes eligible pace for three-year-old colts and geldings Friday, June 11. Driven by Sam Widger, Always Rockin stopped the timer in 1:50.0. 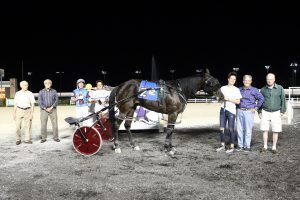 Starting from post two, Always Rockin got a good seat early behind race leader ER Rocky and Don Eash as fractions of :27.0, :54.1 and 1:22.0 were set. In the stretch, Always Rockin pulled out to challenge and paced home in :27.3 for the one and one-quarter length victory. Aracache Can Dance and Ricky Macomber Jr. finished second over Brother Dick and LeWayne Miller for third.

Always Rockin, trained by Ernie Gaskin, paid $15.80 for the win. The Rockin Image sophomore is owned by Triple Seven Stable of Anderson, Ind. and was bred by Ernie Graber. It was the second career win for Always Rockin in nine starts and was a new career best time. It was also the second career ownership win for Triple Seven Stable, whose only horse to date is Always Rockin, purchased as a yearling for $12,000 at the Hoosier Classic Yearling Sale. He is the first and only foal out of Always Wearable, who took a mark of 1:52.1 and earned more than $150,000 during her career.

Earlier in the evening, Shelly Rockwell and James Yoder were greeted in the winner’s circle by a large group of supporters after winning the $20,000 Indiana Sired Three-Year-Old Fillies event. After sitting in third most of the mile before being flushed out, Shelly Rockwell paced home in :26.3 to win in 1:51.2 by one half length over Uncut Gem and Joey Putnam. JK’s Shining Star and Sam Widger finished third.

Shelly Rockwell is trained by Yoder and owned by Marlin Fry and Jeff Baker. Fry bred the sophomore daughter of Time to Roll with Glen Hershberger from their brood mare Norma Rockwell. Shelly Rockwell is now three for four in 2021 and the race was a new career best for her. Shelly Rockwell is a half-sister to Genie Rockwell, who took a mark of 1:49.0 last year and has in excess of $177,000 for Fry and Yoder.