Always Gonna B You got her first win of 2022 Sunday, May 15 at Harrah’s Philadelphia. Driven by Tony Morgan, the sophomore Indiana bred scored an impressive win in 1:52.0. 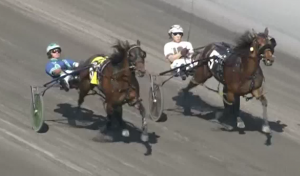 Always Gonna B You, inside with Tony Morgan, paces right on be Rable for her first win of 2022 at Harrah’s Philadelphia.

A lot of speed was detected early in the conditioned pace with Rable and Andrew McCarthy shooting out to the early lead, passing by the quarter in :26.4. From there, she was able to slow down the pace with Always Gonna B You right on her back past the half in :55.3. Heading down the backstretch the second time, several horses tried to get out and advance, but none were able to catch up to the top two, who passed the three-quarters in 1:23.2.

In the stretch, Morgan moved Always Gonna B You down into the passing lane and rallied home in :28.1 to score the comfortable win in 1:52.0. Rable was a dominant second over Joyride Hanover and Tim Tetrick, who rallied up from the back of the pack for third.

Always Gonna B You was the favorite of the field, paying $6.40 for the win. Trained by Joe Holloway, the Always a Virgin filly is owned by breeders Roll the Dice Stable and Val D’Or Farms. She now has a first and a second in two starts for 2022. Overall, she has four wins and more than $157,000 in earnings. Her career best time was taken last summer at Harrah’s Hoosier Park in 1:51.1 under the direction of trainer Jeff Cullipher, who handled her care while she shipped to Indiana for the Sires Stakes program.

Holloway, who has campaigned numerous champions during his career including the great Jenna’s Beach Boy, was recently inducted into the Delaware Sports Hall of Fame. He was only the fourth individual associated with harness racing to receive the honor.